In this exercise we practise two things which are prerequisites for carrying out Ancestral State Reconstrution (see exercise 3). Constraining tree inferenc to include particular nodes is useful for incorporating prior phylogenetic knowledge into your analyeses, and is crucial if you want to reconstruct values at these specific nodes. Analysis with multiple partitions lets you use multiple kinds of data at once, and is also used in ancestral state reconstruction.

Exclude a language from the analysis:

Note that MrBayes automatically redoes the ascertainment bias check when you change the included taxa.

Constrain the search so that it only visits regions of the tree space containing the South Aslian clade:

In the Ancestral States Reconstruction exercise (exercise 3), MrBayes will estimate the values for all clades defined by the constraints command.

Output of the taxastat command: 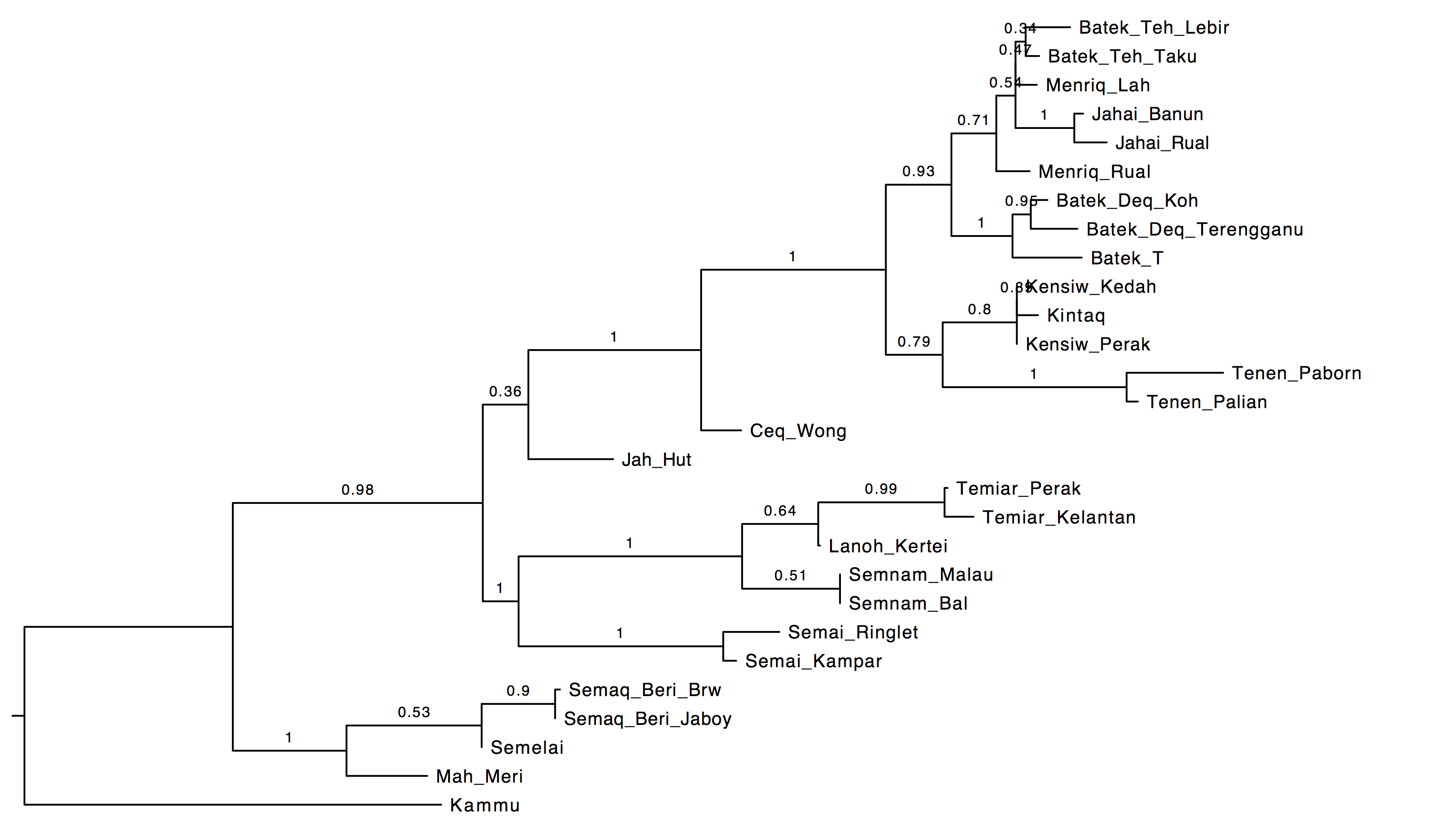 To do this manually you need to calculate the harmonic mean of the log likelihood scores of your parameter settings. This is surprisingly easy:

To compare how much we can prefer model 1 to model 2, take twice the difference between the harmonic means:

The interpretation of Bayes Factors are:

Cognate presence/absence is coded using the binary restriction data Type. If you have e.g. structural data with more than two states you should use the standard data type. The exercise on Ancestral State Reconsruction contains an example.

You can include two different kinds of data evolving under two different models in a single analysis. It is defined as follows in the NEXUS file:

The numbers 1-100 and 101-201 specify the columns to be included in each partition. Then in the MrBayes block you name the character sets, define a partition (a combination of character sets), and set this partition as the active one:

If you’re doing this by the console you can enter showmodel to see what the current setup is for each partition. The parameters can be set for partitions individually, or in groups. The following command sets both partitions to use gamma variation for rates estimate:

Other things to think about include the coding setting (for ascertainment bias, which might be different in the different kinds of data you’re using). If you enter showmodel again you can see that many parameters are shared across partitions. You probably want these to be estimated separately, which you do with unlink:

Check the difference with showmodel.

Finally, this analysis assumes that all partitions evolve at the same rate. To set MrBayes to estimate rates independently for each partition, use: