The MrBayes software package is operated from the application console (a special terminal just for MrBayes provided by the package itself); you can also use it with the unix/linux terminal if you are already familiar with that.

1.1 Prepare and load the data (e.g. in a Nexus format file

1.2 Set the evolutionary model and priors

Minimally you have to set the model (using lset) and the priors (using prset).

We’ll set two things, the substitution model and the rates model. The substition model is set by nst, and has three possible values (1, 2 or 6).

Most of these models are designed for nucleotides (A, C, T, and G); only the F81 model is suitable for binary (‘restriction’) data. F81 is parameterised as a single rate for q01, while the rate q10 is derived from the relative frequencies of 0 versus 1 in the data.

The gamma rates model assumes that features can be classified into a certain number of rates classes.::

By default MrBayes uses four rate categories, but if you want a different number you can set it (note that processing time increases proportionally to the number of categories). Here I speed things up by reducing the number of classes to two::

You can set all these things in one go if you want (I’m going to put ngammacat back to four, because it’s a good compromise)::

For better for worse MrBayes chooses quite workable priors all by itself. But you should really aim to work out what MrBayes is doing, and make informed decisions of your own.

Relevant priors include information about

To review the model settings before the analysis you can enter showmodel.

You set the parameters of the Monte Carlo Markov Chain search with mcmcp. The arguments include:

For example, mcmcp filename=mytest tells MrBayes to write the output to files with the prefix mytest.

Once we’ve got some output to look at we’ll probably want to change ngen and samplefreq, but you can’t decide this ahead of time. You can also set these parameters on the mcmc command, which launches the Monte Carlo Markov Chain search::

Take a look at how fast the data is scrolling past (rows are numbered) and estimate how long the run will take to complete. You probably have time for a cup of coffee.

When the chain comes to an end (and you are running MrBayes interactively rather than controlling it by a script) the programme gives you the opportunity to continue the search for longer::

The rule of thumb here is that if the average standard deviation of split frequencies is less than 0.01 then you’ve probably run the chain long enough. Otherwise enter yes and let it carry on.

The other way to check convergence is to look at the likelihood trace. You can do this by loading the log file into Tracer http://tree.bio.ed.ac.uk/software/tracer/, or if you are an R user, you read it into R and plot the values::

You can then repeat the analysis using other evolutionary models, and compare how they fit in order to select the best model to describe your data.

Did you notice the warning when you read in the data to MrBayes?:

Let’s use R to try to work out what’s going on. We’ll read in the data, and look at the values::

So there are 68 columns with all zero in the database. The warning message refered to 69::

From the MrBayes manual:

There are lots of ways to look at your results 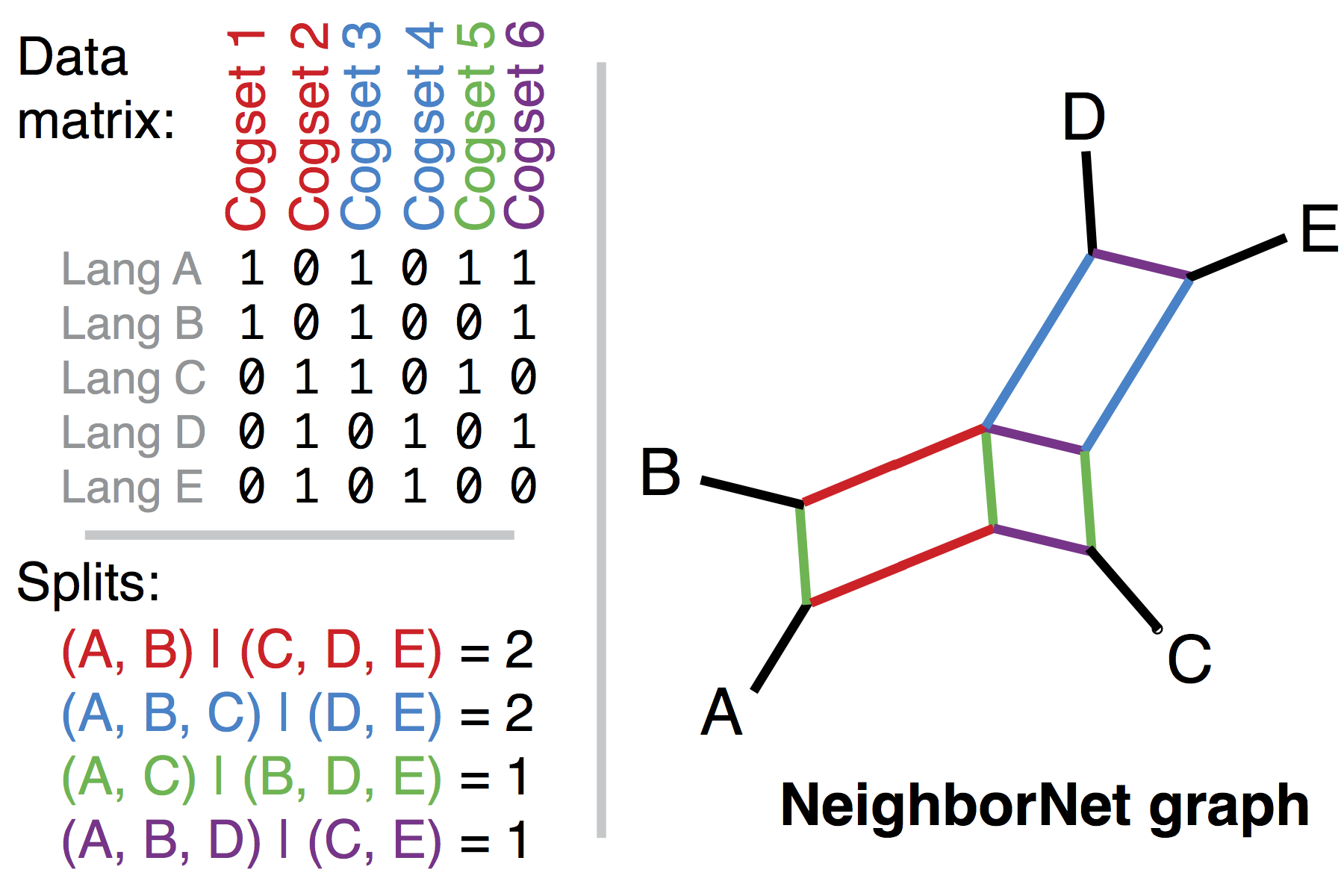 If you do choose to reduce your sample to a single tree, use R or FigTree to make a nice picture out of it.

Running MrBayes from a control file

Rather than typing in all the MrBayes commands each time you tweak an analysis, it is much more reliable to use a “MrBayes” block in your nexus file. This block starts with begin mrbayes; and (like any other nexus block) ends with end;. The MrBayes block can contain any command that you type into the MrBayes console; but don’t forget to end them with a semicolon (the nexus standard — this also allows for more readable, multiline commands. It’s good practice to include comments to yourself explaining what the control file is supposed to do. Nexus comments go in [ square brackets ]. Here is an example of somewhat elaborate MrBayes block::

You can then run this file in MrBayes using the command line mb myfile.nex (assuming that the file with the data in it is called myfile.nex. If you want to be left with an interactive console once everything has been run, use the -i flag, i.e. mb -i myfile.nex. Another neat way to do it is to keep the data in one nexus file (e.g. like the Aslian28.nex file used in the exercises above, and then make a control file with just the mrbayes block. Include execute Aslian28.nex; as the first line, after begin mrbayes;. This way you can have multiple control files with different settings, but all using the same data file.